The Writing's On The Wall

One of the more disagreeable discrepancies of American life in the 21st century is the world according to Washington’s economic bureaus and the world as it actually is.  In short, things don’t add up.  What’s more, the propaganda is so far off the mark, it is downright insulting. 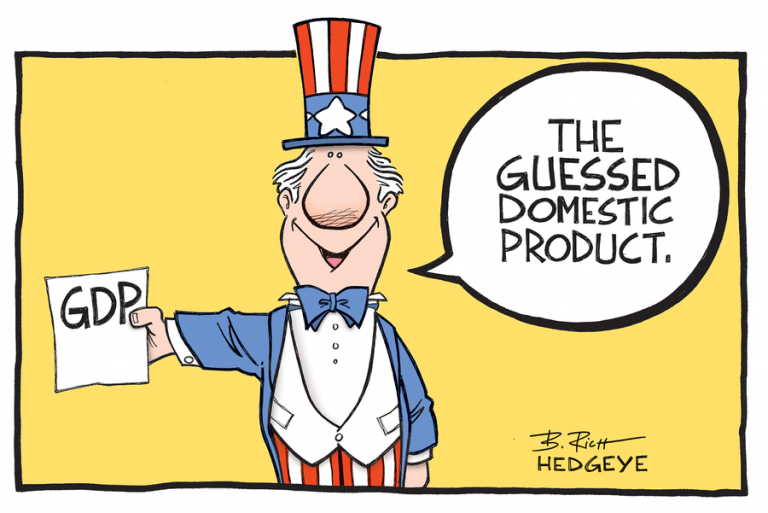 Coming down from the mountain with the latest data tablet… [PT]

The Bureau of Labor Statistics (BLS) reports an unemployment rate of just 3.7 percent.  The BLS also reports price inflation, as measured by the consumer price index (CPI), of 1.8 percent.  Yet big city streets are lined with tents and panhandlers grumble “that’s all” when you spare them a dollar.

In addition, good people of sound mind and honest intentions are racking up debt like never before.  Mortgage debt recently topped $9.4 trillion. If you didn’t know, this eclipses the 2008 high of $9.3 trillion that was notched at the precise moment the credit market melted down.

Total American household debt, which includes mortgages and student loans, is about $14 trillion – roughly $1 trillion higher than in 2008.  Credit card debt, which is over $1 trillion, is also above the 2008 peak.  To be clear, these debt levels are not signs of economic strength; rather, they are signs of impending disaster.  Moreover, they’re signs that American workers have been given a raw deal. 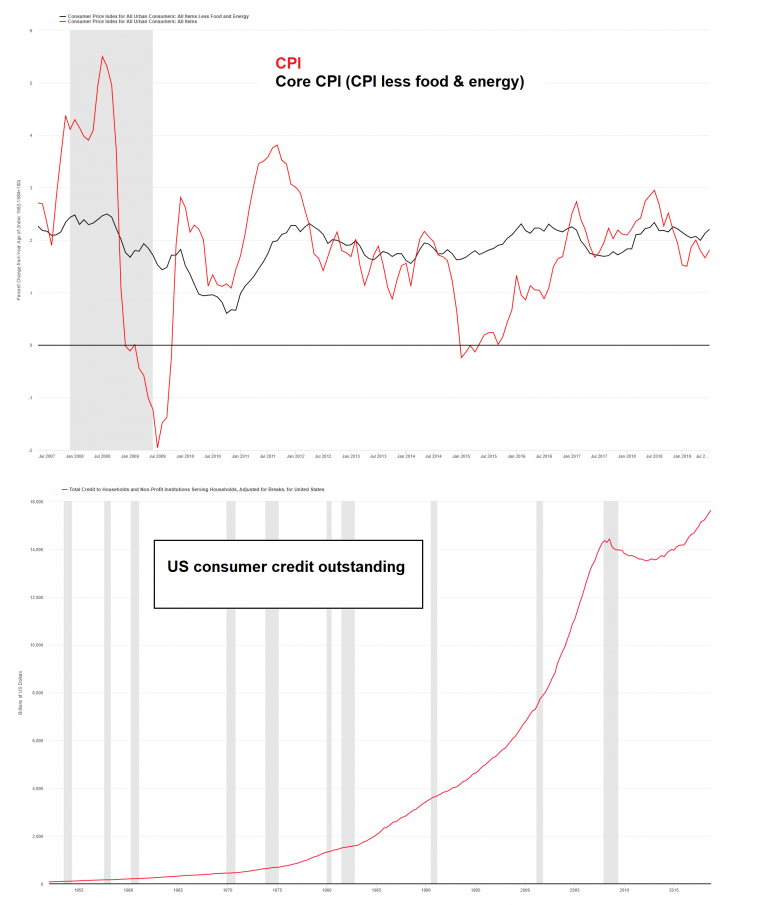 How is it that the economy has been growing for a full decade straight, but the average worker has seen no meaningful increase in his income?  Have workers really been sprinting in place this entire time?  How did they end up in this ridiculous situation? 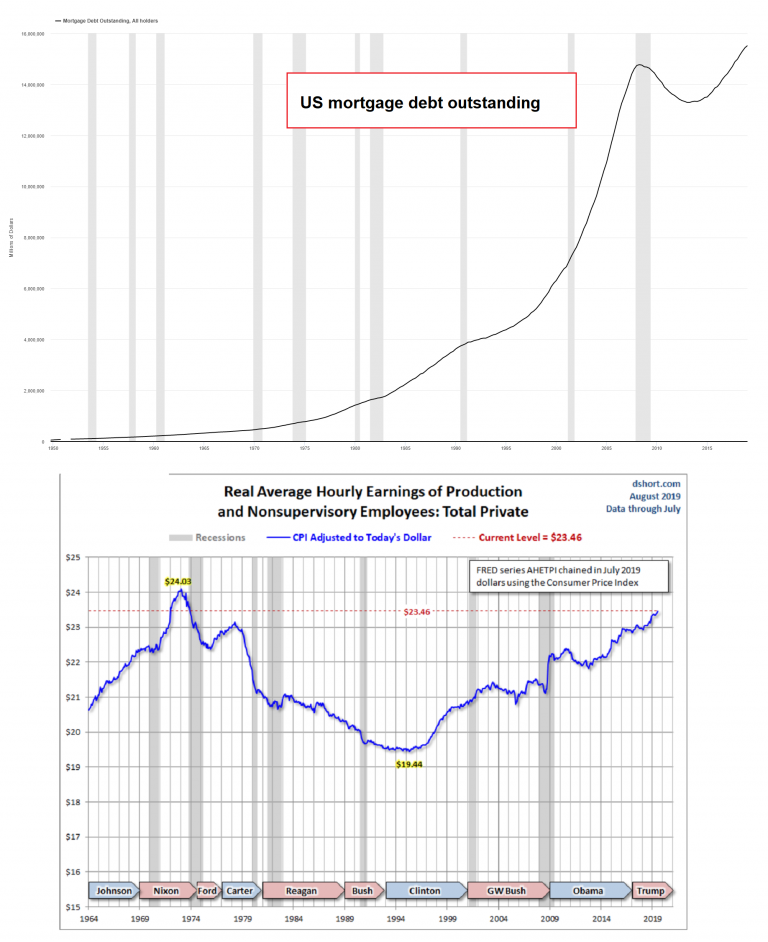 You can no more ignore these discrepancies and signs of impending disaster than you can ignore a gathering of pyromaniacs in the alley behind your residence. Most nights their penchants will be restrained to barrel fires.  But come the next full moon, they will let out a communal howl and burn down the city block.

On surface, it takes a downright pathological character to go into hock at the rate achieved by U.S. consumers, U.S. corporations, and the U.S. Treasury.  Only mental defectives, Scientologists, and university economics professors can justify it with a clear conscience.  Nonetheless, these debt loads are a symptom of the compulsive effort to hold onto an economic golden age that’s slipping and sliding away. 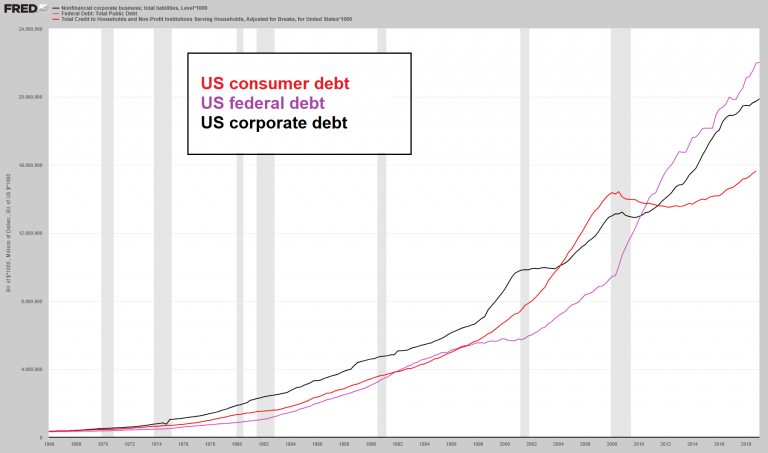 Components of the US debtberg – consumer, federal and corporate debt [PT]

Indeed, the golden age of American prosperity was fun while it lasted.  From the close of World War II into the 1970s, the rising tide of wealth lifted all boats.  Since then, the appearance of prosperity has been preserved through the massive accumulation of debt… which was made possible with the Federal Reserve’s fake money and fake interest rates.

Unfortunately, when debt runs up to these extreme levels bankruptcies follow.  In the State of New York, for instance, bankruptcy filings have risen steadily over the last three years; from 30,112 in 2016 to 34,711 in 2018.  As you can see, the game over button – via bankruptcy – is the only way out when debt loads become this overwhelming.

Writing on the Wall

Over the last 40 years, growth has been extracted from the future via massive infusions of corporate, consumer, and government debt.  Hence, future productivity will be spent paying for this episode of pathological madness. And having to service these massive debt burdens will condemn future growth to mere stagnation. This effect was fully apparent over the past decade’s period of anemic economic growth.

Now, at the worst possible time, the fabricated wealth of the stock market is beginning to crumble.  Blind faith in the Federal Reserve to keep stocks at a permanently high plateau has been shattered.  Fed Chair Powell has lost control.

Perhaps not anymeure, as Clouseau would say. [PT]

After peaking at 3,027 on July 26, the S&P 500 has lost 6 percent.  In reality, a 6 percent decline is nothing at all.  A 20 percent decline is needed to get to true bear market territory.  But given the degree and duration of this bull market, and the monetary deceit that has perpetuated it, a 50 percent top to bottom decline – or more – is possible.

To make matters worse, the U.S. Economy seems headed for recession. The Treasury market is even signaling it.  Specifically, on Wednesday the yield on the 10-year Treasury briefly fell below the 2-year Treasury yield.

10 year minus 2-year treasury yield spread – it briefly visited negative territory this week, but closed a smidgen above the zero level. Since then it is steepening again. If the steepening continues and accelerates, it will indicate that a recession is imminent. [PT]

The last time these two yields inverted was in 2007, during the run-up to the financial crisis.  And while a recession may not immediately follow this signal, you can already read the writing on the wall.  Call it an early warning.  Call it divine insight.  Call it spiritual graffiti, if you will.

But ignore it at your own peril. 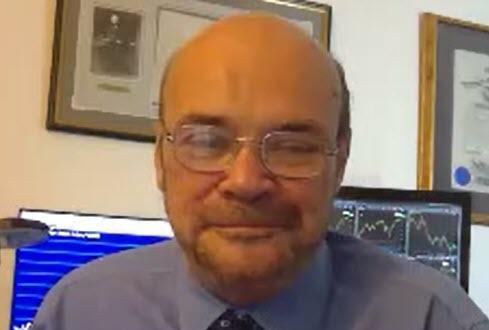 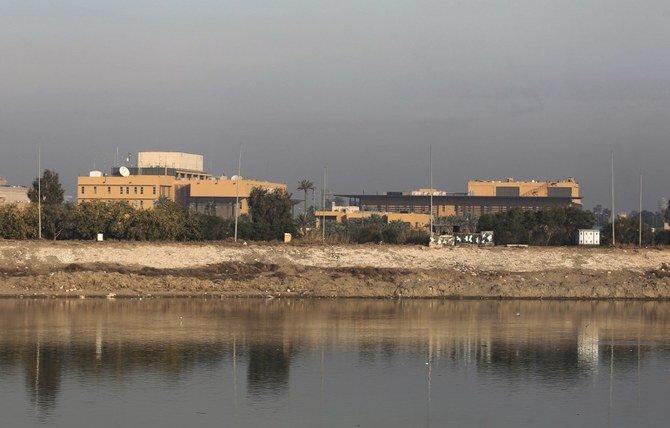 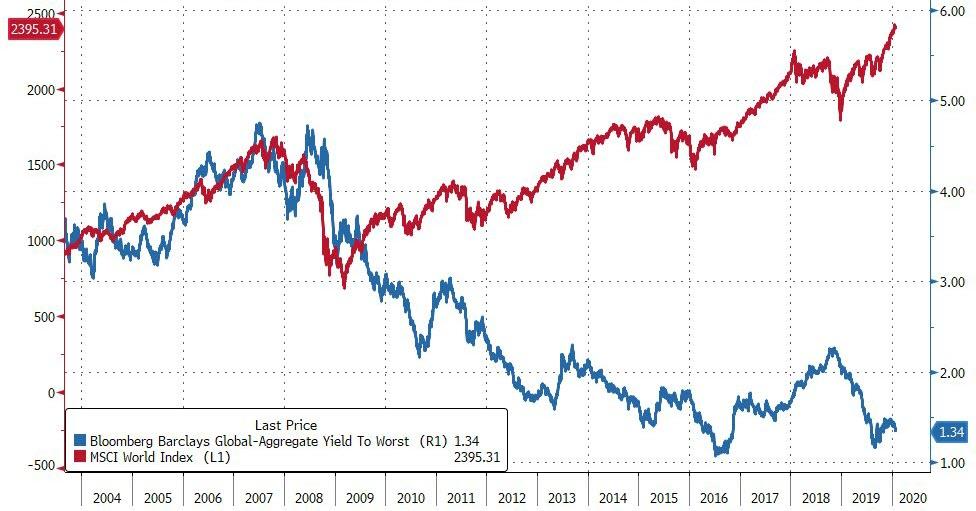